The Price of Storage through the years

Ok, so it’s a fact of life that inflation governs the price rise of most things we buy. House prices have risen exponentially in the last 30 years, car prices have followed that same increase, along with the general cost of living. One thing that goes down, however, is technology – in particular, storage.

I remember seeing an old advertisement on one of those “Back in the 90’s” shows, and it was a Harvey Norman commercial for a Compaq computer system (remember that name?) for a fairly standard desktop setup, with a special price of $4,399. I could build a comparable system with today’s technology for $950. The big change is storage, the size of the hard drive.

It still applies today. Visit any tech store and you’ll see the range of phones and tablets with different storage sizes – 16GB, 32GB or up to 128GB, with a huge price difference from small to large. Storage is the governing factor in price when it comes to the new technology, and the image below demonstrates the price reductions for 1 gigabyte of storage. 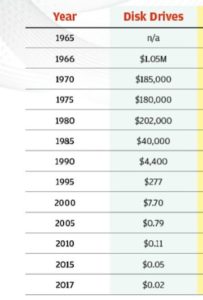